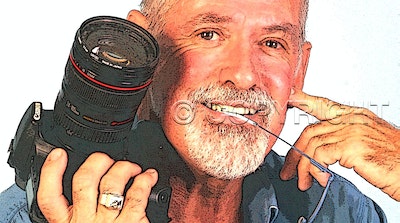 Baz Ledwidge is one of Darwin's best-known photographers, having called the Top End home since 1974. He first arrived in the tropics after transferring with the Australian Information Service from Canberra. Before long he found himself in the middle of Cyclone Tracy, one Australia's worst natural disasters on record. Awaking to a city almost completely obliterated, Baz snapped some of the first astounding photographs on the ground that sent shudders around the rest of Australia.

Despite an early interest in graphic design, he first picked up a camera at age seventeen when he scored a cadetship in his hometown, Wagga Wagga, NSW. Working for the Wagga Daily Advertiser, Baz encountered a steep learning curve as he was sent from football matches to murders, car accidents to street parades.

But the inevitable itchy-feet soon hit and by 21, Baz was jet-setting to London with his newlywed wife, Boofy. While working in other industries, his creative flare and avid interest in photography remained. After the UK, he found his next adventure in Papua New Guinea as he relocated to Lae in 1971. Amidst the vibrancy of PNG he worked in various casual jobs, at one stage even trying his hand as a wharfie in charge of cargo arriving at the port - to his own disbelief.

When he eventually settled in the Northern Territory, Baz was employed as a photographer at the Northern Territory University (now Charles Darwin University), a job he held for over twenty years. On life in the hot and sometimes wacky Darwin, he hopes the city always retains it's unique character that drew him to the northern capital all those years ago.